Its been an awfully long time sense I updated this review. Sorry about that.
As you may already know, Nano Studio now supports Audiobus! Hooray! Its a fantastic addition to one of the most recognized mini DAWs for iOS. The way Audiobus works with Nano takes some getting used to, but it works well. Nano is still probably one of the very best for those starting out, or even pros. Its so versatile and uncomplicated that anyone can get a long way with this. The Eden synth is a classic, and easily worth the price on its own. This has always been a winner, and looks like that will continue.

I’m so excited to see Nano Studio get updated to support iPad native. The interface is crisp and clean, and they made better use of screen space with much improved positioning of features, functions, etc.
Everything is just as great as ever, but now it just looks better, and that feels good while working with the app. Thankfully, a lot of careful thought went into the updade keeping the original feel with the same friendly, intuitive work space, now with sharper visual presentation and layout. Stability is just as reliable as ever, and everything I’ve raved about in the past remains just as fantaststic.
Nano Studio has surpassed the competition, and somehow manages to do everything right.
Clearly this is the leader for iOS studio apps when it comes to creating electronic music. This has been well worth the wait.

Read on for my original review below.

This app kicks the competition to the curb, even with 2 less tracks than the typically seen 8 track apps.  I have all the serious DAWs that iOS offers, such as; Multitrack DAW, Music Studio, Studio HD, Meteor, BeatMaker1&2, GarageBand (reviews for those coming soon), etc. Not one of those can do all that Nano Studio can.  At $14.99 for the basic 6 track version, it’s the best I’ve seen. 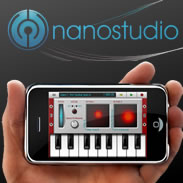 One reviewer at  iTunes  wrote that it’s missing some TRG (trigger pad banks) tracks, but that is not true.  The basic version has a huge amount of trigger pads you can use.  I would not hesitate to get this basic version.  If you are a serious musician, I would also spring for the upgrade for an extra $5.

Upgrade:
For just $5 more, I upgraded with the 16 tracks for instruments.   It’s unreal! This is more than enough for most serious artists. Seriously, Nano Studio with the 16 track upgrade has just taken over as my favored work station. No reason any serious musician would find anything troubling at all.  It never crashes, it’s stereo, it’s high quality, it has great FX, excellent mixing capabilities, wave editor, etc… it does everything I need. Forget most everything, including BeatMaker 2. None of them can keep up with Nano. They all have good points, but they all fail to deliver a one stop work station.

That said, I use NS on my iPad 1 (and 3rd generation iPod) despite no native support, and it’s the most reliable and deepest of all the iOS work stations.
The Eden synths are fantastic. It has two strong, robust mono and polyphonic synthesizers, with amazing presets full of rich variety. It is full of tweaking abilities with envelope, oscillators, mods, filters, waveforms,  and patching. It even has X,Y pads to add textures in real time.
You can chain and insert FX, or global, each track can be mixed with the on board mixer, and everything can be automated including pans, fades etc. Don’t forget a highly optimized waveform editor to play with your imported files. AND a full mix down facility, and exporting via general pasteboard. I think I got it all? If I missed a detail, rest assured, Nano Studio didn’t.

As  a recording artist who uses iPad exclusively for all my music, I need reliability, stability, quality, and freedom. Nano Studio gives me all of that and more.
The basic version, though very capable alone, it didn’t quite suit my needs. But now, it’s over the top. Spend the $20 total (with the $5 in app purchase for 16 tracks) and you’ll not need any other work station or so called studio type app. I can’t wait for it to get gussied up with native iPad support, and maybe even a better user interface taking advantage of added screen space?  Still, even scaled up on the iPad there is no compromise in any of the audio quality or functions–maybe just a little fuzzy in the graphics., but no big deal.
Not only can you count on Nano Studio to do everything you need ie, pasting files from other apps to one of the Eden synths, or TRG pads, sampling, audio sampling, and re-sampling too.
With Nano Studio you don’t need a computer anymore except for storing files or as a back up. The iPad and Nano Studio together have all but made music making on a PC or Mac obsolete.
It’s just getting better.

This app is to iOS devices what Logic Pro is to Mac Pros. Not the same, just equally impressive all things considered. Get it.