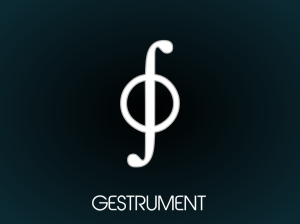 Gesture and Instrument met one crazy night on a blind date set up by their friends. It was love at first touch. They had a child and named it Gestrument.
Gestrument grew with the best attributes of its parents into the perfect combination.

Alright, enough of that. You get the picture. Gestrument is a new MIDI controller and instrument created by Jesper Nordin and Jonatan Liljedahl.
Designed for ease of use to comfortably perform a multitude of musical styles, Gestrument delights the senses.

Controlling other iOS music apps via virtual MIDI is, as it should be, a simple process. Simply put, you just load another synth, enable its background audio and MIDI out, wallah, you’re in business. Gestrument just knows what to do. You can expect that further MIDI development is underway.

Gestrument is shipped with its own synth and dozens of great preset sounds, assignable to 8 instrument banks. These can be played simultaneously or in any combination along with whatever is being controlled in the background. Tap the instruments 1-8 on or off on the fly. Some pretty interesting combinations are at the ready awaiting discovery.

Each instrument can have its own settings, such as pitch, note length, range etc. A nice reverb with 3 quality settings can be applied to the overall mix. It would be nice if each instrument could have its own FX setting, but for now its global. All On or all off. 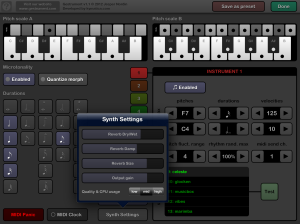 Playing Gestrument is intuitive and uncomplicated. Your iPad screen is the whole playing surface. It’s a nice use of screen space without waste. One finger controls the instruments, the other controls selectable parameters (Like pulse, pitch, scale morphing, and rhythm) by dragging away and angling from the first. It’s a snap. Depending on where you touch the screen and how you combine the second touch will impact the sounds the instrument makes. It’s a very clean and expressive way to create music. It’s easy for anyone to start making great music right away. Gestrument also has just the right amount of options for the experienced musicians who desire a greater amount of control.
Although a little light on programmable options now, further development will surely add more complex options as Gestrument grows. The developers are open to user feedback. So if you want something, just ask them. You may get it.

Visit HERE for more on Gestrument from its creators.

It would be really nice to see some more gesture, or multi-touch controls. As is, the multi-touch is limited to 2 fingers. It’s all in how you combine the movements. It may sound like that’s not much, but a lot can be done with some creative use in how you play it.

Recording and playback looping are available. AudioCopy and direct link to AudioShare are also included. Gestruments recorder however doesn’t seem to record MIDI controlled sounds. You’ll have to use the record function from the other app for that.

I have found Gestrument to be a very pleasant app. It’s a synch to use, and sounds great. This is a quality instrument and is highly stable. It’s not crashed on me once even while playing all 8 instruments and controlling the two synths from Magellan.
This is the chocolate and peanut butter of gesture and instrument. Yum.