Chomping At The Bit

I’ll be honest, I don’t know the first thing about programming with C-like code
expressions. So my initial impressions of BitWiz were puzzling. Put some
oscillators, filters, envelopes etc in front of me and I’m comfy, but C codes?
Bitwise, Arithmetic, algorithms, operations….. say what now? Where’s the

Well maybe I’m exaggerating a little, but I really am not proficient in
programming codes. BitWiz, thankfully, makes it so I don’t have to be. After
reading the in app instructions, it’s really not so difficult. In fact, it is
simple to learn. After a little time exploring the included library of presets,
and messing with the codes, I was finding myself engrossed in a 8-bit synth,
world of generative musical wonders.

With such an open world of code possibilities, a randomize feature, and creative
code tweaking I was making cool 8-bit stereo sounds. Feeling very retro, I was
playing it like an instrument with its spacious X/Y pad, and day dreaming of my
first NES console. Not so hard at all. Learning how to make evolving generative
sounds that seem to take on a life of their own is a real blast. It was like I
was in some 8-bit dimension where ghosts of Nintendos past took over
orchestrating a new epic cave adventure sound track.

BitWiz is MIDI
supported, so if you’re thinking about piping in your programmed masterpieces to
your MIDI keyboard, you can.
You could also just record your sounds in app,
and audio copy to paste in other compatible apps. Or, open in other apps like
AudioShare to keep it safely cataloged for a project. Recordings and codes can
be uploaded to SoundCloud, emailed, or even Tweeted.

It seems to me that BitWiz was designed with ease of use in mind. Maybe
considering that a very streamlined interface would help ease some users
trepidation of all the C code involved? Well, it works and had that relaxing
effect on me. It has a consistent retro look all around and displays the
waveform responding and moving to touch input on the X/Y pad. All things
considered, my initial discomfort is but a memory leaving me to feel good about
recommending BitWiz. Check it out. 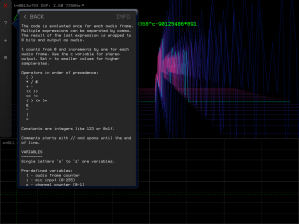 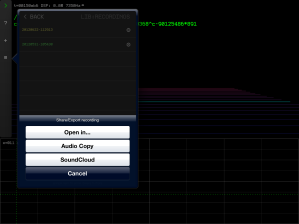